Donald Trump is unwilling to compromise, unabashed and unlikely to stop at anything short of getting his way. Young children in the U.S. want more of this type of behavior, so Bumpkin.com has gathered nine reasons children love Trump and how Trump always gets his way.

1. Trump eats whatever he wants

Numerous journalists have noted he doesn’t follow healthy eating rules. As indicated by Dr. Harold Bornstein, “Donald Trump is as healthy as a horse.” In a public statement, this personal doctor for Mr. Trump reports that he would be “the healthiest president in history” despite his frequent snacking and diet of mostly french fries. Trump’s never had tumor, or hip substitution, or any surgery beside an appendectomy when he was ten years old, the doctor added.

2. Trump wants us to have the most toys

He knows the United States should be much richer and have many more toys. This fact has disturbed and rankled Trump. He sees other countries who try to get ahead of the United States as a malignancy – a tumor that current politicians don’t see. He wants to make America into something that is great again, measured by our material successes. He has also shown, through his own bankruptcies, that it’s okay to spend all the money out of another’s piggy bank and not pay it back.

3. Trump understands the importance of television

He is a man who has battled for his nation in the place that counts most – television. He has been fighting in these trenches as a genuine representative of the general population by taking the microphone on television and “living it real” in reality television. There are many reasons children love trump, but his reality television experience might be his single biggest asset when dealing with the harsh realities of international politics.

4. Trump says it’s okay to call your father a jerk

After the online journal Boing Boing dug up the story of a vintage 1927 edition in the New York Times with a report that his father, Fred Trump, was arrested at a KKK rally in New York, Trump has completely distanced himself from the organization and his father. “Fathers are the worst,” Trump is rumored to have said. “Except for the millions he bequeathed to me. There’s that.”

5. Trump always gets his way

The reasons children love trump come down to him always getting his way. While debating the other Republican candidates, Donald Trump perfected head shaking and repeating “No-No-No” to avoid having dialogue with the other candidates on the problems at hand. Instead, he blamed them for all problems and repeated his demands over and over again until everyone gave up and stopped talking. Children love Donald Trump because he knows how to get his way every time.

6. Trump says it’s okay not to get along

Who says we have to love our neighbors? In fact, Trump thinks our neighbors need to stay where they belong and keep to their own. And by allowing them to build their own walls, the blocking of immigrants is done without hurting anyone. They will be encouraged to stay where they can keep their long afternoon naps and won’t have to cut grass or deliver sizzling dinner plates that are too hot to touch.

Trump has said he attends Presbyterian church every Sunday. He also has a deep understanding for how the world’s religions are influencing politics and the future of the United States. In March 2016, he told CNN’s Anderson Cooper, “I think Islam hates us.” Before the 2012 presidential election, Donald Trump told Fox News’ Bill O’Reilly there is a “Muslim problem. I don’t notice Swedish people knocking down the World Trade Center.” He has also demonstrated a practical knowledge of religious affiliations: “I came out very strongly against the mosque being built virtually across the street [from Ground Zero].”

Trump is very concerned about Americans and the dangers of foreign economies that threaten America’s self-centered way of life. He has promised to keep America in the driver’s seat at all costs and has given interviews time and time again (practically dropping fliers from planes!) in an effort to forestall more wars. He is doing everything he can to avoid conflict by clearly stating his vision for keeping America’s individuals ahead of everyone else.

During Trump’s rise to power he has continually talked about rallying the youth of this country to be the center of his world. He has appeared on television constantly and demonstrated national pride through his own business repeatedly. He often talks about ‘tidying up’ America and has repeatedly talked about the foulness of those who don’t belong and that they should be put into “time-out”.

Children love trump because he reminds them of themselves and other great leaders who rose to power by following their own unadulterated ideological fantasies. 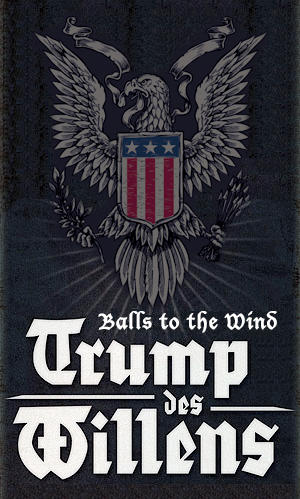